From Beyond The Unknown Giant

From Beyond The Unknown Giant 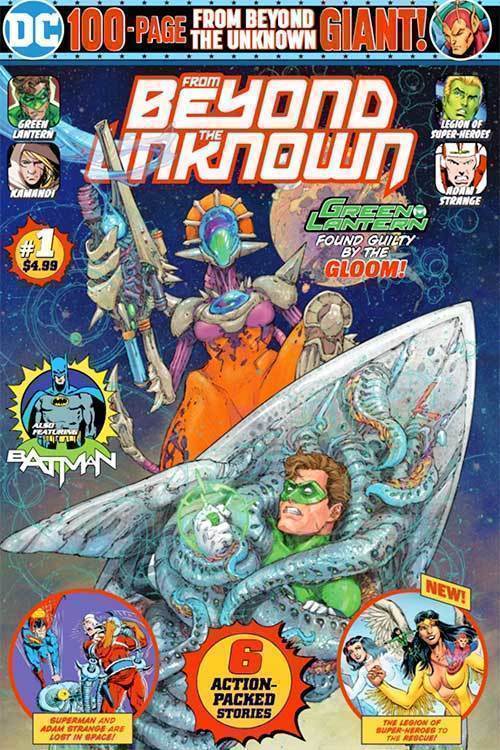 GREEN LANTERN The Gloom by Dave Wielgosz, Kenneth Rocafort, Daniel Brown, Zakk Saam, Liz Erickson and Katie Kubert – Green Lantern Hal Jordan is responsible for policing all of Space Sector 2814, but more often than not his attention is on his home planet Earth. When the alien bounty hunter Bolphunga crashes to Earth pursued by a team of murderous vigilantes, Hal learns the truth: these rebels have taken justice into their own hands, and Hal himself has been found guilty. KAMANDI THE LAST BOY ON EARTH – The Butler, by Tom Sniegoski, Eric Gapstur, Marissa Louise and Ferran Delgado, Liz Erickson and Katie Kubert. On Earth-AD (After Disaster), the world is a very different place-a postapocalyptic wasteland, full of talking animals and other strange sights While exploring his dystopian home, Kamandi, the last living human, stumbles upon a robot butler patiently awaiting the return of his human masters, who disappeared years before. Kamandi takes pity on the loyal butler and tries to reunite him with his long-lost family… however unsusual that reunion might be, THE LEGION OF SUPER-HEROES – Stealth Mode by Dan Jurgens, Norm Rampund (happy birthday Norm), Hi-Fi, Ryan Christy, Liz Erickson and Katie Kubert. In the far future of the 31st century, the super-powered teens known as the Legion of Super-Heroes protect all the citizens of the United Planets. But when Legionnaires Sun Boy and Wildfire are kidnapped, their teammates must infiltrate a mysterious ice planet to try to save their friends…and the planet! SUPERMAN and ADAM STRANGE – The Riddle Of Little Earth Lost by David Michelinie, Jose Luis Garcia-Lopez, Jerry Serpe, Ben Oda, Julius Schwartz and Jack C Harris. Superman has always protected Earth from dan while across the galaxy, Adam Strange does the same for his adopted home planet of Pann. But when evil scientist Kaskor manages to swap the positions of Earth and Pann in space, Superman and Adam find themselves trapped and under attack! Can our heroes outwit their captor and save their homeworlds from annihilation? BATMAN and THE METAL MEN – The 50 Story Killer by Bob Haney and Jim Aparo. When a new mayor is elected in Gotham City, Batman is forced into retirement, replacements: the Metal Men, robots embodying the natures of gold, platinum, mercury, iron, tin, and lead who are impervious to harm, But Gotham's new protectors are forced to call on Batman's help when armed men break into Wayne Enterprises – if only he weren't also being held captive! THE GREEN LANTERN CORPS – Blackest Night by Alan Moore, Bill Willingham, Terry Austin, John Constanza and Gene D'Angelo. While seeking to recruit a new member into the Corps in a far-flung region of space, Green Lantern Katma Tui encounters – a problem the Lantern Corps has never come across before