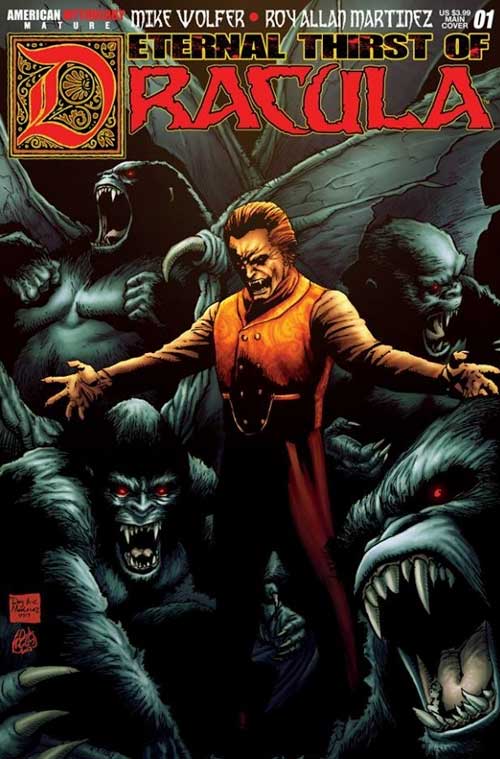 In the annals of horror, one name towers above all others as the true titan of terror: Dracula! American Mythology Productions unleashes an all-new tale of Bram Stoker's classic creation as you've never seen before, written by horror comics veteran Mike Wolfer (Night of the Living Dead, Friday the 13th) and illustrated by the sensational Roy Allan Martinez (The Immortal Iron Fist, Civil War: Frontline, Wonder Woman). Set in 1975, The Eternal Thirst of Dracula finds the insidious vampire king in self-imposed exile on a remote island in the Philippines, a tropical paradise where he has created his own kingdom far from the prying eyes of the modern world. Behind the walls of the island fortress lie unimaginable terrors, as Count Dracula and his vampire brides slake their insatiable thirst for human blood throughout the halls of his mansion of the damned. But a hideous enemy lurks on the horizon, far deadlier than the disintegrating rays of the sun, a threat that could destroy all that Dracula has built, and possibly Dracula himself! Available in regular and nude cover editions, The Eternal Thirst of Dracula is for mature audiences, and contains unflinching horror and gore that is not intended for sensitive readers. Available with two covers - Main and Brides Nude covers by horror maestro interior artist Roy Allen Martinez.