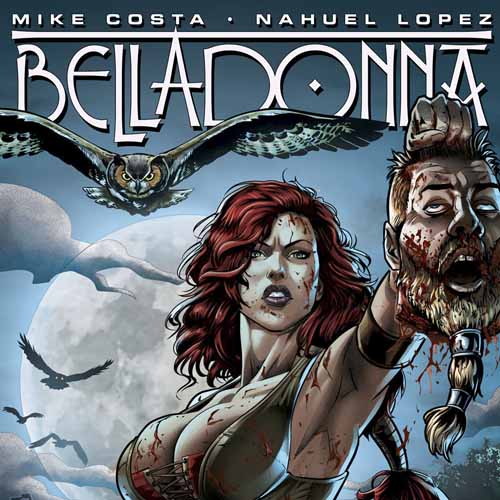 In an age of iron and stone, one woman's fury would inspire a ferocious band of female warriors to rise up against the evils of the land. Mike Costa (God is Dead) returns to the fiery femme fatale that took comics by storm with a tale ripped from the pages of fantasy. The unstoppable warrior queen has tracked down the sorceress that has been plaguing the land but her sensual powers are able to pit both magic and monsters against those who dare to defy her. Prepare for a powerful risque fantasy tale set in an age of warriors and wizards! Belladonna combines the best of classic swords and sorcery with a sexy hard edge that you can only find in Boundless Comics! We offers a host of sexy stunning covers with this issue including a Regular Cover &Wraparound Covers by series artist Nahuel Lopez, Shield Maiden by Matt Martin, Blood Lust by Raulo Caceres, and Killer Body Cover by Renato Camilo. Plus an array of super limited covers for the collector including a Century Nude set of six covers (limited to 100 copies each) by Paulo Siquiera, a three-book Costume Change Set (limited to 250 sets) and three-book Nude & Naughty Set (Limited to 350 sets) both by Christian Zanier. And for the erotic art collectors, there are Nude, & Wraparound Nude Covers by Lopez, Shield Maiden Nude by Martin, Blood Lust Nude by Caceres, and Killer Body Nude Cover by Camilo! To top it off, there is a Topless Leather cover by Ron Adrian! To see the uncensored covers, please visit ww.boundlesscomics.com.