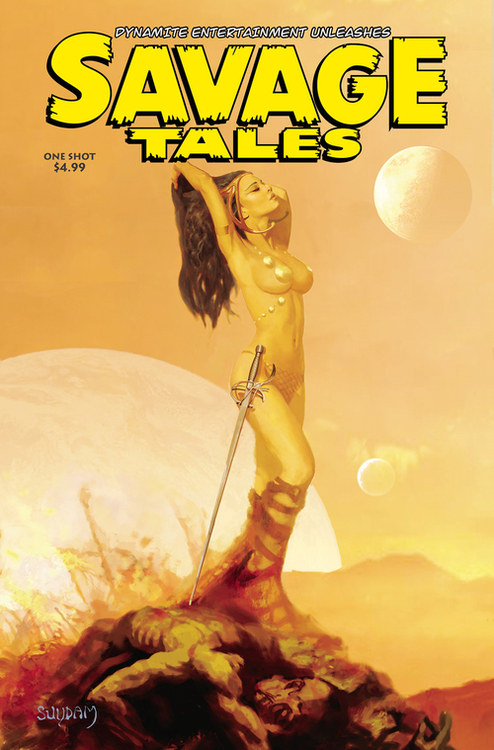 "Savage Tales is back with four tales of brutality, thrills, and spills! This one-shot features art by her two up-and-coming artists from the renowned Kubert School! This issue's lineup includes: 'Devil Juice' by Scott Bryan Wilson and Max Fuchs: Draculina finds that to get revenge on an enemy demon, she's first got to go through a wall of... body-builders? 'Crypt Junkies' by Scott Bryan Wilson and Kubert School artist Mariano Benitez Chapo: Vampirella accompanies a reality TV crew to film the opening of a 1,000 year old sarcophagus... with unforseen, bloody results! Captain Gullivar Jones in 'His War Chapter II' by David Avallone and Kubert School artist Hamish Munro-Cook: More mystery from the journals of Gulliver Jones and his strange relationship with the savage world of Mars! John Carter and Dejah Thoris in 'Honeymoon on Mars' by David Avallone and Eman Cassalos: It's a tale of love and adventure featuring the Warlord of Mars and his beautiful mate, Dejah Thoris, on the dying world of Barsoom!" One Shot